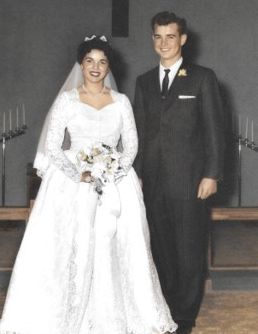 Gerald “Jerry” Dale Gilbertson, 82, passed away April 11, 2021 in Mount Vernon.  He was born on September 7, 1938 in Glenwood, Minnesota to Chester and Sophia Gilbertson.  His family moved to Bellingham, Washington when he was 5 years old.

Jerry met his future wife, Sharon Tieman, as teenagers picking strawberries in the fields of Whatcom County.  He would ride her on his handlebars on their first dates.  They went steady through Bellingham High School while Jerry earned his rank as Eagle Scout and competed on the swim team.  After graduation, he served his country in the U.S. Navy for 2 years.  They wrote letters and sent pictures across the oceans.  “Are you still dating that cute, dimpled guy?” Sharon’s friends would ask.  When Jerry stepped off the ship sporting a tattoo of Sharon on his arm, it was obvious that they would soon tie the knot.  Jerry and Sharon were married on April 25, 1959.  They had three children, Bret, Robin & Becky.

His love affair with cars began at 16.  A 1937 Ford was his daily drive, one he painted while at Bellingham Tech body and fender school.  At 22, he started a career with Puget Power as a high-voltage lineman.  His first brush with death came at age 35 when 7,200 volts of electricity went through his body while on a power pole.  Doctors said he would not have use of his right hand again.  Missing one finger and numerous skin grafts later, Jerry proved them wrong.  He went back to work at Puget in less than 6 months.  Going on to be a foreman, then retiring after 32 years.  Never one to stay idle, he went to work for Potelco until 2011.  His life was shaped by his hobbies and the friends he made along the way.

At his home in Mount Vernon, he built a shop with a paint booth and restored old cars for himself and other people as a hobby; he was a talented work-a-holic.  Jerry worked tirelessly in the shop on his own cars and others, sandblasting, welding, wiring and painting them to perfection.  He mentored and painted others, freely sharing his vast skill and knowledge.  For himself, he completely refurbished a 1947 Ford convertible, a 1940 Ford pickup and a 1936 Ford cabriolet convertible.  Much of his work is still out there in the Valley and beyond.  Some of his happiest and proudest moments were chauffeuring the bride and groom at his daughters’ and granddaughters’ weddings and driving in the Samish Island Parade.  Swap meets and car shows were in his blood.  He belonged to the Skagit Old Car Club then The North Cascade Street Rods where he made lifelong friendships.

Jerry was an avid sportsman who loved the outdoors.  In Mount Vernon, he joined the local archery club and earned the distinction as Silver Bowman.  He bow-hunted for deer and goats.  League Pool was a game he excelled at as well.  He was a member of the Ski Patrol at Mount Baker, combining his athleticism with desire to help others on the slopes.  Jerry loved fishing of all kinds, including fly fishing (he tied his own flies) in Canada, salmon fishing in the Skagit (he made his own spoons), bass fishing at Lake Terrell near Ferndale, underwater spear fishing in the bay, and steelhead fishing on the Clearwater River in Idaho.  He enjoyed fishing with his son, Bret, grandson, Chad and both sons-in-law, always teaching respect for the sport and an appreciation of nature.

In 1967, Jerry and Sharon visited a vacation community called Glenhaven near Alger to look at property and partake in the free radio promotion.  They wound up with the free radio and a waterfront lot on Reed Lake with a huge fir tree, perfect for the rope swing Jerry would hang.  Jerry and Sharon built an A-frame cabin on that lot which became a gathering place for family and friends.  Every summer Sharon moved the five of them to the cabin.  After work, Jerry would dive into the lake off the rope swing, and then “soap up” to wash off the dirt and sweat from a hard day’s labor.  He taught his kids and grandkids to dive off the dock, tie a square knot and cast a fishing pole.

A man of few words, Jerry led by example.  He seemingly could build or fix anything, and his skill-set included: auto body repair and painting, mechanical, carpentry, electrical, and all forms of home remodeling.  He worked alongside his family and friends, imparting his wisdom to all who listened and paid attention.

Jerry was a “meat and potatoes” guy who firmly believed that the four food groups consisted of popcorn, ice cream, crab and watermelon.  He looked forward to watching the Seahawks every week, often surrounded by good food, dogs and great grandkids.  He enjoyed Westerns, American Pickers, and Fishing Shows.  There was always a dog in his life and in his home.  Jerry’s “Donald Duck” impersonation was spot on, it made kids giggle and beg for more.  Weekly breakfasts with car loving friends were not to be missed.

In the last few years of his life, Jerry was dealt a difficult hand.  He was diagnosed with ALL Leukemia in 2007, and told by doctors that he didn’t have long, to go home and put his affairs in order.  It may have been that Jerry didn’t understand this, but more likely that the doctors didn’t understand the quiet determination of a man who would defy the odds and persevere.  He received a stem cell transplant with a match from his sister, Loretta, making 13 more years possible.  It was heartbreaking to see Jerry endure the stem cell transplant, cancer treatments, hospital stays, doctor visits, and numerous daily medications.  Sharon was there through all the ups and downs as Diabetes, Neuropathy, COPD, CHF, Parkinsons, and Kidney Failure were added to his condition.  Numerous times he faced death, yet he never gave up.  The last few years, Jerry’s body was becoming frail, still his mind was always thinking about how he could fix the ‘36, catch a bigger bass, or win at dominoes.  His deep devotion to family evident as was their love for him.  Through all of his medical challenges, he never complained; he had the most amazingly strong will to live.

Special thanks to Seattle Cancer Care Alliance, Dr. Roger Estep, and Jolene Benson who provided the best care and to his sister, Loretta who donated her stem cells for the transplant.

A Celebration of Life will be held on Thursday, August 12, 2021 from 1-4pm at the family home. Memorials may be made to the Skagit Valley Humane Society or Boy Scouts of America.  Please sign the online guestbook.