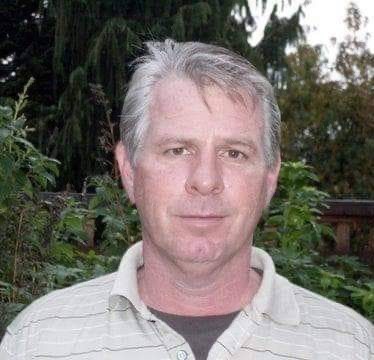 James “Jim” Alan Engberg, 60, passed away peacefully at his home in Mount Vernon WA surrounded by his loving family on September 19, 2022 after a long courageous battle with kidney failure.

He was born July 11, 1962 to Lowell W. Engberg and Arlene M. Webster in Seattle, WA during the Seattle’s World Fair.

Jim spent his early years with his mother traveling the U.S. finally settling in Virginia Beach, VA where he attended Colonial high school, he was known as the C.K. or California Kid. This is where he met his lifelong friend Mouse and later his wife Cathy Jones. Jim loved surfing, the water and just being at the beach during his time in California and Virginia Beach.

In his early 20s Jim moved to Sedro-Woolley to join his father Lowell Engberg, stepmother, Faye, brothers Joe and Denny and sister Denise. It was great to start building new friendships in the valley.

After moving to Sedro-Woolley many things brought him joy. Although playing and coaching softball was on the top of the list. Be it a field near or far, Jim could make your day with his arrival. If you know you know. He loved to be on the field. He also loved golfing and just being on the water. Making special memories in the ocean or at the Big Lake Family property.

Jim met and married Suzie Scott on April 15, 1987 they raised her children Megan Tweddell, Amy Clark, Erin Meastes; niece, Crystal Forbes (he was like a second dad to her), niece, Axia Engberg.

He and Suzy continued their real-estate career and owned and operated Re Max Realty in Burlington for 18 years. Jim’s career in real estate thrived and he made many friends throughout that time. Ivana and Perry Wood and many other amazing friends he made along the way, these friendships have lasted a lifetime and he was very grateful for each one.

Jim and Suzy parted ways after 23 years together raising a family and building their careers. After his success in Real Estate Jim joined his brother Joe and nephews Kyle and Jaeger Engberg working at Auto Track/Westside Motors in Mount Vernon WA. In 2010 Jim met Julie Bergman and built a relationship that later turned to a lifelong friendship where she stood by his side to the end.

Jim is preceded in death by his father, Lowell Engberg; brothers, Denny Engberg, Eddy Engberg, Ritchie Fuller, Robert Newbold, William Fuller; his lifelong friend, “Patman” Pat Fletcher. With so many loving siblings, Jim was blessed to have numerous nieces and nephews. They all had their special places in his heart, and they will all miss him dearly.

“Everything to gain and nothing to lose. So, live your life in Christ”- Jim Engberg.

Memorial Services will be held at 1:00, at Lemley Chapel in Sedro-Woolley on Saturday, September 24, 2022 with Pastor Ron Deegan officiating. His request was a Celebration of Life that will be held at his sister Denise and brother-in-law Kevin Hamilton’s home at 7916 Parker Road, Sedro-Woolley.  Share your memories of James and sign the online guest register.