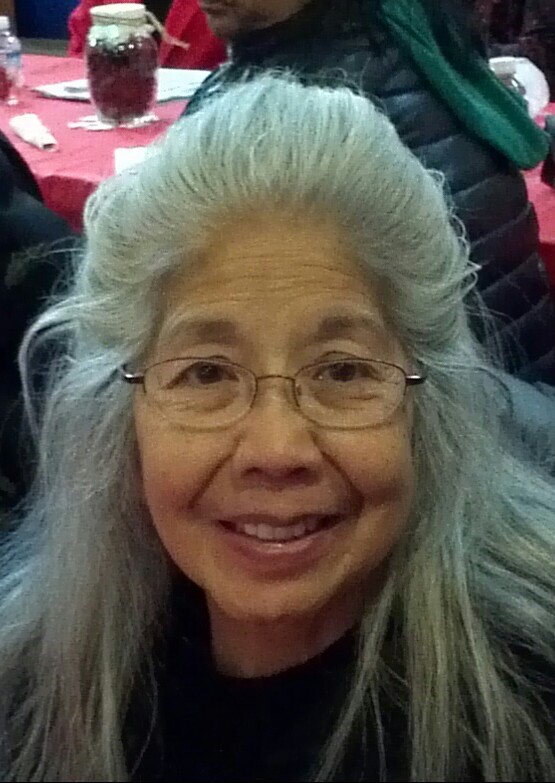 Carmen ki?ialqs Pastores-Joe passed quietly in her home.  A proud member of the Upper Skagit tribe, she was born August 20, 1942 to Eva Joe and Augusto Belllisario Pastores (Albert). She spent her childhood playing with her beloved siblings Cisco Pastores and her baby sister Rita Pastores (Scoones). She graduated from Cleveland High School in Seattle, WA. After graduation she worked at a Chinese restaurant at the Seattle World’s Fair. She married Paul Curtis Pennington, and had two children, Lisa Pennington Howard and Lora Pennington.

She accomplished much in a diversity of fields from working illegally as a child in a garment factory in Seattle,  a teller at Seattle First National Bank at the airport branch and then moved up into management in Human Resources and training and development. With each promotion she was the first Native American woman to have held that job. She volunteered with American Society for Training and Development (ASTD) a non-profit organization for training and development where she held many local and national positions. In her 40’s she went back to school and received her bachelor’s and Master’s in business administration simultaneously from Oregon State University, while working full time. After graduating, she returned to Seattle and ran the student advising office at Seattle Central College on Broadway.  She decided to return home to the Skagit Valley where she helped open the Upper Skagit Tribal Casino as the personnel director. While in the Skagit Valley, she learned our traditional language Lushootseed from her auntie Vi taqwsheblu Hilbert and learned traditional cedar bark and wool weaving.  She taught countless students how to weave and how to speak our Native language Lushootseed

She received a lifetime achievement honor from the Tulalip Tribe for her contributions to our culture.  She was a board member and treasurer for the Northwest Native American Basketweavers Association (NNABA) and was a former chairperson for Lushootseed Research Board of Directors, a non-profit began by Vi Hilbert.

A viewing will take place at 2:00, Wednesday, June 8, 2022, at Lemley Chapel, followed by a Prayer Service  at 7:00, on Wednesday at the Upper Skagit Indian Tribe Gymnasium. A Funeral Service will be held at 10:00, on Thursday, June 9, 2022 at Upper Skagit Indian Tribe, followed by a burial at the Hamilton Indian Cemetery. Share your memories of Carmen  and sign the online guest register.