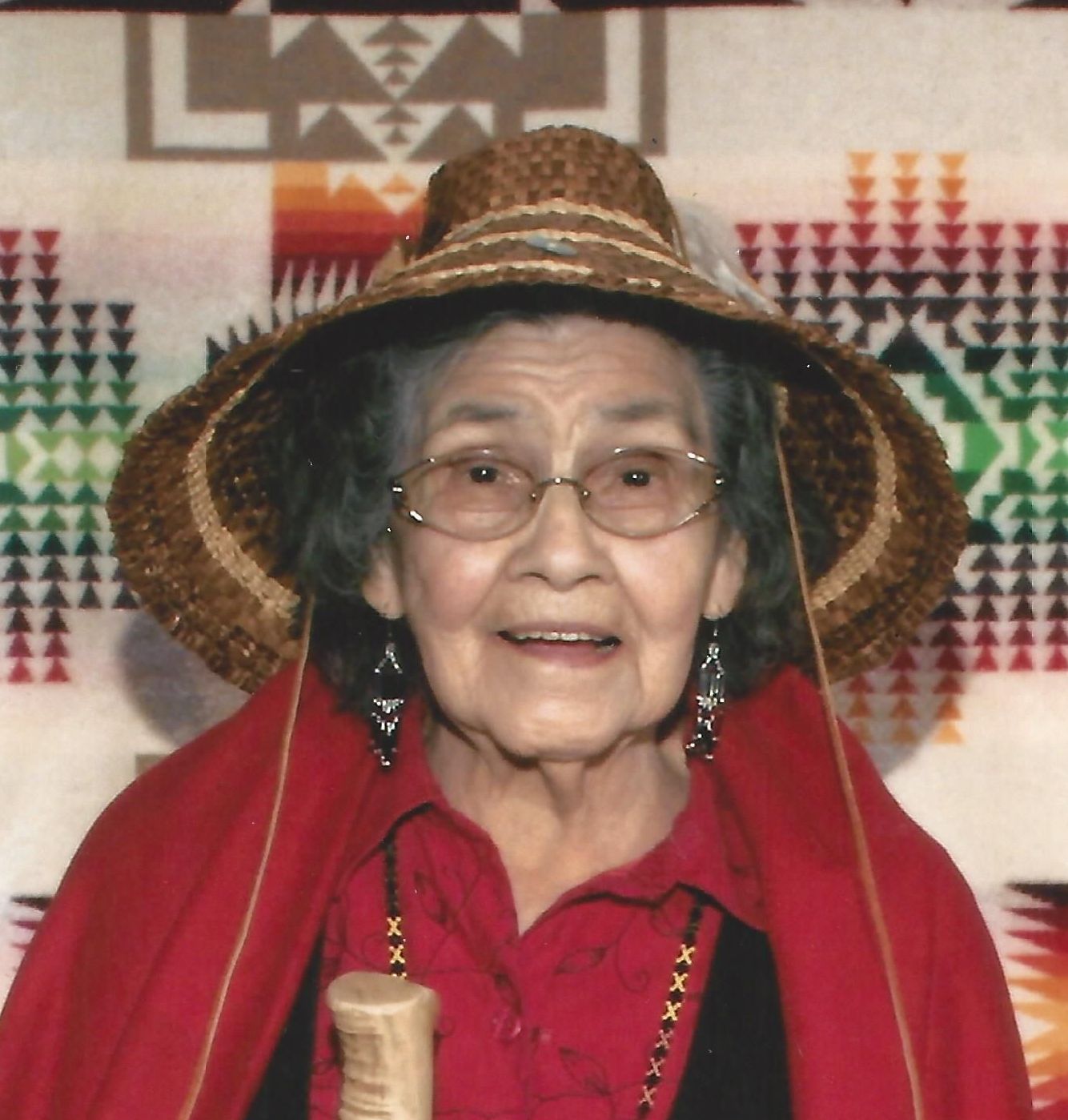 Violet ‘Vi’ Irene Fernando, 97, the eldest elder of the Upper Skagit Indian Tribe, ended an adventurous and storied life on Saturday, November 9, at a Sedro-Woolley hospital.

Vi was born May 27, 1922, in Rockport, the eldest daughter of Lottie Tom.  Her grandfather, Frank Tom, ran the cable ferry across the Skagit River at Rockport for many years.  When the river was too swift for the ferry, Vi would sometimes ride with Lottie as she took passengers across in a cedar shovel-nosed canoe.  An acknowledged tomboy, Vi would join her uncles in hikes over the North Cascades to hunt and pick huckleberries. She passed a love of the river and mountains on to her children.

As a young child, Vi spoke a mix of Skagit Lushootseed language and English. At about six years old, she was made to go the federal Indian school on the Tulalip Reservation near Marysville, where Indian children were punished for speaking their language or practicing their traditions.  Vi thought she buried her Skagit language there, but she was delighted to relearn it in the 1970’s when a beloved cousin, Violet Hilbert, began teaching Puget Sound Lushootseed at many tribal centers around the Sound.

Vi’s first husband was Richard Moses of Marblemount, with whom she had daughter Linnette and sons Richard Jr. and Harold.  She met her second husband, Faustino “Fred” Fernando, near the end of the Great Depression when both worked picking strawberries on Vashon Island in King County. They married in July 1941, had ten more children, and remained together 54 years until Fred’s death.

Shortly after World War II they bought a small farm in the Kent Valley, and eventually sold produce at Seattle’s Pike Place Market, where Vi became known as the “Strawberry Queen.” Vi also worked as a tailor, and later both she and Fred worked at Boeing, though they continued farming.

Upper Skagit Indians regained the right to fish in traditional grounds in 1974, and Vi moved back to the Skagit Valley shortly after Fred retired from Boeing.  She had set salmon nets by cedar canoe with her mother, and was excited to learn drift gillnetting with her grown children, now using motorized river skiffs. Together, Vi and Fred would keep the campfire and coffee hot, and watched over the grandchildren at the family fishing camp.

In the late 1970’s Vi was elected to the Upper Skagit Tribal Council at a time of great change for the tribe, and was re-elected several times. She also became a Community Health Representative for the U.S. Indian Health Service, helping bring health care into the homes of Skagit people.

While she honored traditions, Vi had a zest for trying new things.  A Seattle food writer once asked about her favorite traditional cooking, and she told him how she loved her microwave. In her early 90’s, hands crooked and twisted by arthritis, Vi took up jewelry making, crafting beautiful necklaces, bracelets and earrings for her family.  At a casino slot machine, she would max bet just for the fun of it, laughing either way.  She loved to hunt, read, hike, dig clams, cook, can, sew, crochet, travel, along with many other pursuits, and passed these interests on to her descendants.

But Vi did slow down eventually, and in her last years living on the Upper Skagit Reservation she helped create, youngest daughter Carmella moved in to care for Vi.  Carmella made sure that Vi not only received good home care, but that she had fun, too.  Carmella was in turn helped by her sister Linnette, Vi’s first-born granddaughter Lana (who Vi lovingly called “her big girl”), and granddaughter Arianna.